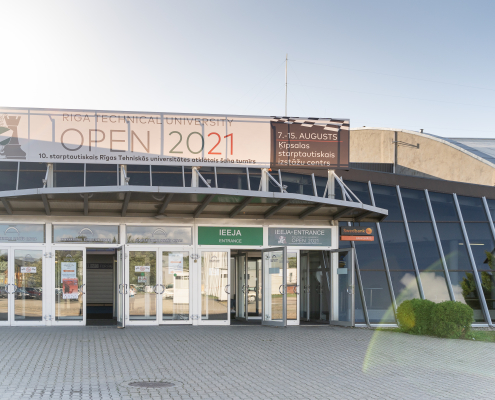 Almost 500 players from over 30 countries participated in the Festival and were fighting for 28.000eur prize fund in the beautiful capital of Latvia – Riga.

A little bit over 10 years ago, FM Egons Lavendelis, decided to organise a tournament. “It started with an informal conversation with the vice-rector of Riga Technical University. At that point our team, the team of Riga Technical University, had just won our first Latvian Team Championship title and we got rights to participate in the European Club Cup. And we were discussing – can we do that? We decided it’s quite an expensive thing and let’s better use the money for Latvian chess in a more useful way…let’s organise a tournament. That’s how it started.” – he shared during an interview. And here we are, a decade later, the Riga Technical University Open has attracted thousands of players from over 50 countries over the years, becoming one of the biggest chess festivals in northern Europe and probably in the whole continent as well!

This year there were 9 different tournaments organised – six with classical control, 2 blitz events and one rapid tournament. Each tournament attracted tens of chess-lovers from many countries, but the main focus was, as usually, the Open A.

The winner of tournament A was Alexander Donchenko from Germany, who was the top seed and he actually signed up for it only 2 days prior to the event! Donchenko had quite a shaky start, scoring only 1.5/3 points, but…as we know it is all about the good finish in chess and he has done something amazing in the remaining rounds – he won 6 out of 6 games! Narayanan S.L from India played very good chess and deservedly finished second in the event without losing a single game. The third place was taken by Lithuanian Tomas Laurusas who had a great summer, won a tournament in Warsaw and got his last GM norm in July, becoming number 1 of Lithuania. There were many strong players, so the fight for the top places was really tense, but finally the top 15 spots were taken by the following players: Thanks to FIDE’s aid package which was a significant support, the prizes for ladies and seniors were bigger this year and the top 3 places in those categories were: The tournaments B and Y (youth) were merged and took a whole week, just like the Open A. Latvians felt comfortable in this one as the winner was Renars Osis from Latvia, first lady was Linda Krumina from Latvia and the best senior was Nikolaj Katishonok also from Latvia! The best junior player was Vilius Rudziks from Lithuania.

Interestingly – all of them finished in the top 5 in overall standings! The C and D tournaments were also played together this year. Designed specially for those who can not commit to a full 7-day schedule of play, those were 4 days and the time control was a bit shorter – 60min+30sec.

The first two places were taken by Spaniards – Alberto Eyo Castro-Rial was first and Dan Cruz Alvarez de Ron was second. They were also two top seeds of the tournament, they have only switched places in the final standings!

The first women player was Eibhia Ni Mhuireagain from Ireland, the best senior was Uldis Melderis from Latvia and the junior’s category was won by Aleksejs Adamovics from Latvia as well. The shortest classical tournament in RTU Festival, Open E, only takes 3 days and has a 30min+30sec time control. The first place was won by a Latvian Agnis Mednis. The second place and also the best lady in the Open E was Anastasija Parhomenko from Latvia. The best junior player was also a lady – Melanija Luize Jansone, who is only 14 years old and finished 4th in the whole event! Stanislavs Saruns from Latvia was the best senior player in this group. Except the classical tournaments, also the blitz and rapid events were organised. Igor Kovalenko, the best Latvian player, won the opening blitz and the opening rapid was won by Abhimanyu Puranik from India. The traditional closing blitz, held right after the closing ceremony till a very late evening, was won by a young Indian star – R Praggnanandhaa. (by the photographer Vitalijs Vinogradovs)

During the whole Festival there was a live broadcast lead by GM Arturs Neiksans and WIM Anna Kantane. They were analysing the games, which were really exciting – a lot of aggressive play, risks and even queen sacrifices were almost an everyday occurrence!

A very interesting part of the broadcast were interviews with the players and special guests. Some of the personalities who joined the studio were: FM Egons Lavendelis – the tournament Director; WGM Dana Reizniece-Ozola – FIDE Managing Director; GM Ilja Smirin – one of the best grandmasters in Europe for 2 decades now; GM Ramesh R B – one of the best coaches in the world; GM Kaido Kulaots – winner of the 2019 Aeroflot tournament and of course GM Alexander Donchenko – winner of the event.

The commentary by the Latvian-Polish duo reached over 124 thousand unique viewers and was watched over 1 million minutes! The whole Festival was a true celebration of the game we all love and what it truly means – sportsmanship, unity, respect and fun!

And as Egons Lavendelis mentioned during an interview, the next editions are also planned, so chess will be back in Riga next summer for the 11th Riga Technical University Open.

“Our goal is clear – we want it to be a Festival for everyone” – added Egons. (by the photographer Anna Shtourman)

You can find out more about the Festival on the official Facebook page.

Because these cookies are strictly necessary to deliver the website, refuseing them will have impact how our site functions. You always can block or delete cookies by changing your browser settings and force blocking all cookies on this website. But this will always prompt you to accept/refuse cookies when revisiting our site.

We fully respect if you want to refuse cookies but to avoid asking you again and again kindly allow us to store a cookie for that. You are free to opt out any time or opt in for other cookies to get a better experience. If you refuse cookies we will remove all set cookies in our domain.

We provide you with a list of stored cookies on your computer in our domain so you can check what we stored. Due to security reasons we are not able to show or modify cookies from other domains. You can check these in your browser security settings.

We also use different external services like Google Webfonts, Google Maps, and external Video providers. Since these providers may collect personal data like your IP address we allow you to block them here. Please be aware that this might heavily reduce the functionality and appearance of our site. Changes will take effect once you reload the page.